Milwaukee Arts Barge makes a splash at the North End

Gallery night was characteristically fertile last night. I enjoyed a variety of exhibits, including William Zuback's moody figure studies at the Iron Horse Hotel, Pamela Anderson, Richard Taylor and Terrance Coffman at the Pfister, and too many folks to name at the Marshall Building. 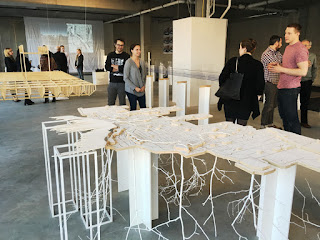 The most surprising find for me last night was not at an established gallery but at the North End apartments. I'd been to their pop up gallery before and on a whim decided to check it out before heading to the usual places downtown.

The exhibit is titled Mobility Matters. According to the wall text panel, it explores "links between mobility, agency and value in Milwaukee." OK, so moving beyond the academic lingo, what really intrigued me was the 3-D map of Milwaukee and the idea of moving an "arts barge" around the community using its waterways. I'm all for "activating" the waterways, as they put it. 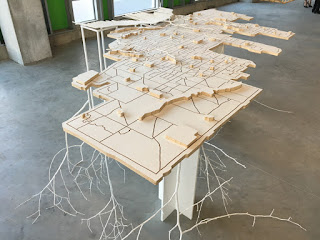 The map is a wonderfully graphic depiction of not only Milwaukee's lakefront and river system, but also its parks and open green spaces, which are represented in raised relief.

There is a Milwaukee Arts Barge website, which describes the project this way:


"Two of Milwaukee’s unique assets, the confluence of public waterways and its performing arts communities converge and newly engage the social fabric of the city through the construction of a floating performance space, the Milwaukee Arts Barge (MAB). The project utilizes Milwaukee‘s most underutilized public space, its network of rivers and lake, as a means to transform the city’s social, political, and cultural boundaries through the performing arts.


"The Milwaukee Arts Barge (MAB) develops new forms of agency for the performing arts communities to choose locations that have both creative and social impact. MAB allows these communities greater access to reimage the future of the city." 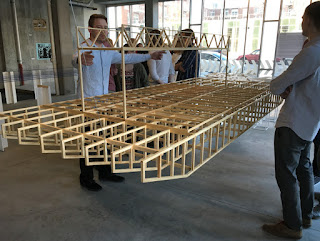 I look forward to hearing more about this project as it unfolds and hope to see a gallery of public art works floating up the Milwaukee River before long.

The Milwaukee Arts Barge is a project of the UWM School of Architecture and Urban Planning. The North End is at 1551 No. Water Street. The display will be on view through June 30, 2016.