At the Lynden Sculpture Garden, the place "where art meets nature," sometimes nature gets the upper hand. This happened on Saturday when visitors coming to celebrate the fifth anniversary had to brave blustery, unseasonably cold conditions along with rain showers of varying intensity. 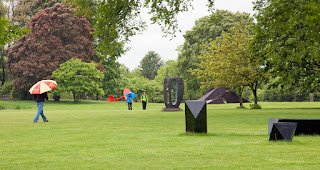 The Lynden opened its doors to the public on May 30, 2010. Seemingly fortuitously, that date fell on a Saturday this year. The event planners accordingly scheduled their 5th anniversary event to coincide with the exact date. But you can't plan for good weather (not here in Wisconsin that is!)

Some stalwarts showed up anyway. Many of the scheduled festivities went on despite the unfestive weather. Children made kites and painted rocks. Former artist-in-residence Paul Druecke joined former writer-in-residence (and birder) Chuck Stebelton for a soggy bird walk. They reported seeing a total of six species, including the resident flock of Canada geese. 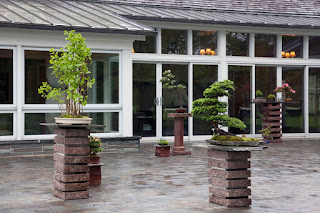 A featured one-day exhibition of bonsai trees, beautifully installed on the patio by the Milwaukee Bonsai Society, was undiminished by the rain. The tiny, sculpted trees were in themselves worth the effort to brave the elements. Bonsai, of course, takes the intersection of art and nature to an extreme, making them one and the same. 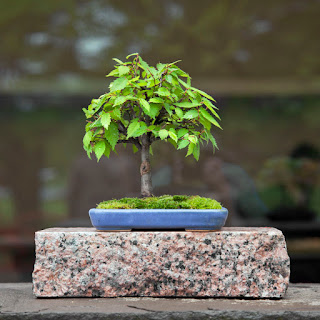 Sara Caron occupied Brian Nigus's vacant Sightseer installation. She could be found ensconced inside--where it was dry! She had created in there a pop-up welcome center and gift shop. 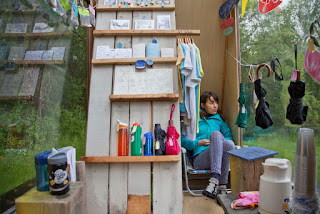 The shop was stocked with Lynden items, including a special 5th Anniversary t-shirt (a first for the sculpture garden) and Lynden cards by artist Sarah Luther. Caron had added a number of umbrellas for the occasion, appropriated from the Lynden's lost-and-found. 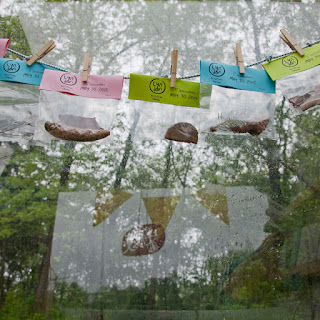 Caron also had creatively packaged up a series of natural items--twigs, pine cones and such--that she had collected the previous day from the grounds.

Speaking of the grounds, the landscape was quite lovely in the wind and rain. The fresh foliage whipped wildly about and gusts continually drew swirls of steam off the pond. 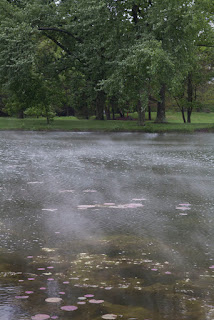 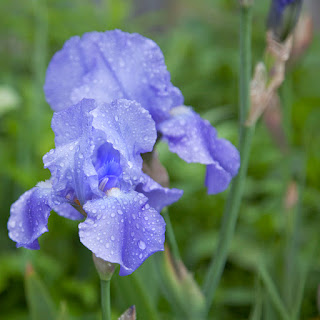 Linda Wervey Vitamvas installed a temporary assemblage entitled "The Feast" in 2013. Whenever I come to the Lynden I revisit the piece to see what changes time and weather have wrought. I've enjoyed seeing the gradual decay and dissolution of the unglazed ceramic plates and chalices. This time the entire structure of the installation had finally come completely unmoored from the shoreline on the pond where it has been situated for two years. 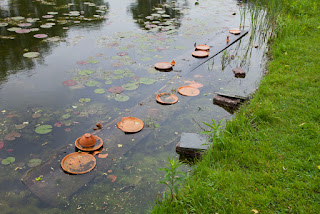 Lovelier than ever, I thought, the earthenware plates emulated the lily pads, floating among them on their submerged platforms. 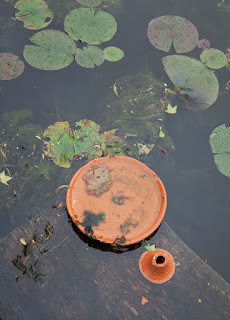 Next time the Lynden Sculpture Garden has an event planned and you see inclement weather in the forecast, dress appropriately and come anyway. I don't think you'll be disappointed. 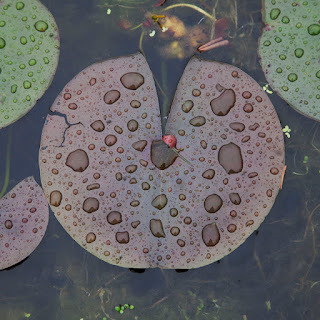 
Full disclosure: I am one of the Lynden’s 2015 contingent of Artists in Residence. To see many more images from my residency (so far) go to my Artist in Residence flickr album.