The good news: small is beautiful.
I am among those who remember when ArtChicago was held on Navy Pier and had a well-deserved reputation as one of the premier showcases for fine art galleries anywhere. It took me many years to return to it after it left there. Last year when I finally saw the show again, it was disappointing. Although it sprawled throughout two floors of the mammoth Merchandise Mart, with some exceptions the work was tepid, timid, commercially slick, or conceptual vacuous.
This year the scaled-down show took up a single floor and, although nothing like its former Navy Pier incarnation, I found it much more stimulating than last year. In fact, I enjoyed it very much. As with any large art show, there were galleries to slip past with a quick glance. But I found myself lingering in them more often than not. The mood also was upbeat with gallery owners saying that they were making sales.
I would have loved to bring home a beautiful 20”x16” Wayne Thiebaud painting for my wife, who is fond of his work. The card said, “price upon request,” so I did. “Just under a million,” was the reply. Nuts. Over my budget. Then I came across a slightly off-sized print of Ansel Adams’s iconic “Moonrise over Hernandez,” measuring a curious 19½”x23¼” also labeled “price upon request.” I had to wonder how large the 20”x24” edition was and the price on the last one of it. This one was “almost a quarter million.” For a print! Later I came across a similarly sized Nevelson sculpture for $125,000, which seemed a great deal by comparison.
It was nice to see good work by a few big names like those and others, but the contemporary art was especially engaging. As I chatted with the dealers about one artist or another, I was asked numerous times if I was a collector. Ever hopeful, I’m sure. I would love to be. Of all the work I saw there my first pick would have been a photographer named Soi Park who had a series called “Buscar Trabajo” (looking for work.) Park photographed Latinos in situations that appeared dangerous, as if they were running or hiding from immigration officers.
What follows is a selection of things that caught my eye – and held it for more than a moment or two. There were many more.

The show began on the sidewalk outside the Merchandise Mart. This is a detail of "Vertical Vegetation" by Jason Verbeek, Cor-ten steel and sedum. 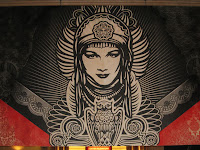 A giant print by Shepard Fairey hung like a banner across the entrance to the elevator lobby. (Detail) 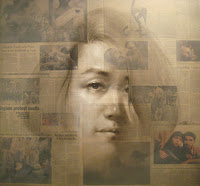 "All you need is Love," Joshua Hagler, oil on canvas. 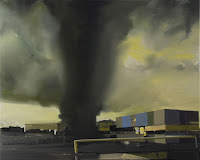 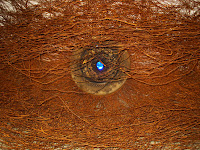 I didn't see individual titles on these translations of urban graffiti into precious Huichol-style pieces made by gluing together colored threads with natural wax. Laura Ortiz Vega. 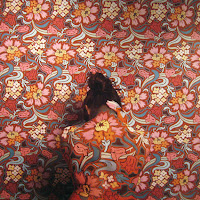 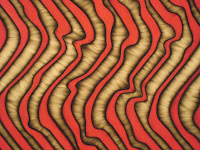 "Quaver," Rachel Nee, smoke and aquacryl on board 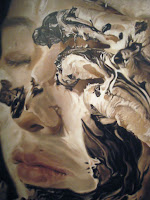 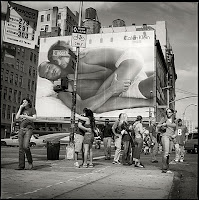 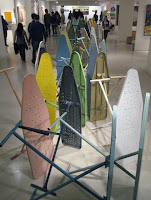 As usual, the "Next" portion of the fair included edgier work and some off-beat installations like these ironing boards set up to resemble fair-goers ambling down the aisles.
Despite its diminished size, I still didn’t make it to all the galleries. But I did make a point to visit the three who came down from Milwaukee.

And one former Milwaukeean, Russell Bowman at his eponymous Chicago gallery
Being Arts Without Borders, I loved that the Chicago Poetry Center had a booth at the fair. They had a series of broadsides that combine artworks with poems. A collaboration between Lawrence Ferlingetti and Ed Paschke was quite stunning, but my favorite was this piece. The text of the marvelous poem by Ana Castillo follows.

I Ask the Impossible

I ask the impossible: love me forever.
Love me when all desire is gone.
Love me with the single-mindedness of a monk.
When the world in its entirety,
and all that you hold sacred, advise you
against it: love me still more.
When rage fills you and has no name: love me.
When each step from your door to your job tires you—
love me; and from job to home again.

Love me when you’re bored—
when every woman you see is more beautiful than the last,
or more pathetic, love me as you always have:
not as admirer or judge, but with
the compassion you save for yourself
in your solitude.

Love me as you relish your loneliness,
the anticipation of your death,
mysteries of the flesh, as it tears and mends.
Love me as your most treasured childhood memory—
and if there is none to recall—
imagine one, place me there with you.
Love me withered as you loved me new.

Love me as if I were forever—
and I will make the impossible
a simple act,
by loving you, loving you as I do.