Scanning quickly through a new book on architecture reveals page after page of carefully composed photographs of a wide variety of structures that are beautiful, dynamic and imaginative. In other words, the types of buildings, the excellence of design, and the quality of the presentation are indistinguishable from the many other thick surveys of contemporary architecture that proliferate in the architecture sections of bookstores. That is intentional. What sets this volume apart is its purpose and perspective. The Power of Pro Bono: 40 Stories about Design for the Public Good by Architects and Their Clients demonstrates that pro bono work can be held to the same standards as any other architecture. It highlights exemplary built projects and argues for the value—and power—of pro bono to benefit not only the public good but the architectural profession as well. 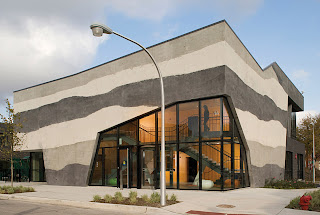 Lavezzorio Community Center, Chicago, IL
Studio Gang Architects
The book is edited by John Cary, who is the former executive director of Public Architecture. An award-winning non-profit organization, Public Architecture "acts as a catalyst for public discourse through education, advocacy, and the design of public spaces and amenities." (Full disclosure: I've known John Cary since he was in high school, when my class was his first exposure to architecture. It is truly invigorating to see how far he's taken it.)
"Pro bono" is often misconstrued to mean "for free" because the work that is done is not billed to the client (or sometimes billed at a substantial discount). Pro bono actually is short for pro bono publicum, which means "for the public good." The common conception that the service is "for free" is a product of our consumer culture, in which cost is a primary consideration. "For the public good" suggests a greater sense of social responsibility. However, this focus on the social fabric does not have to come at the expense of the bottom line. In his introduction, John Peterson, founder of Public Architecture, says that "pro bono projects routinely generate deeper client/architect relationships than conventional fee-generating work." goes on to say that through their involvement in these kinds of projects architects "often find a new dimension of personal and professional purpose." 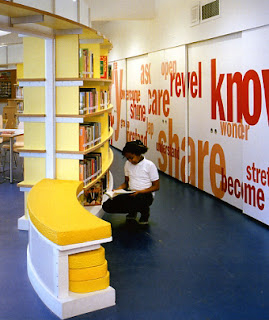 Robin Hood L!brary Initiative, New York, NY
HMA2 Architects
All architecture exists within the intertwining contexts of setting and function. It is the most social of arts and inevitably affects the public sphere. Yet, surprisingly, the profession has no historical commitment to pro bono work as does the legal profession, for example. The Power of Pro Bono seeks to change this and provides not only a rationale but cogent arguments for why such a change would benefit both the public and the profession. The many examples cited in this book and the many firms that now actively include pro bono work as a regular practice seem to indicate that the profession is ready to step up to the plate. says "It turns out that pro bono work doesn't just benefit those who are served; it fortifies and inspires those who serve."
Kudos to John Cary, Public Architecture, and The Power of Pro Bono!