If you’re on my email list you already should have received an invitation from me to attend the opening of Inside/Outside, which opens this Sunday. This is a sneak preview of and brief introduction to the show, on which I collaborated with Phil Krejcarek.

If you have not seen the invitation, here are “just the facts:”

The show runs through Dec. 12.
The opening is free to all. (There is normally a fee for entry. See the Lynden Garden website for details.)
The story behind this show begins several years ago when, during my Urban Wilderness book project, I discovered a 3-mile section of the Little Menomonee River that was “under construction.” Long story short, I found the construction fences that had been strung through woods and wetlands to be aesthetically arresting and conceptually engaging. I produced a series of photographs that I called Accidental Art to indicate that the visual effects created by the installation of fences were an unintended consequence of their utilitarian function. My contribution to the “inside” portion of Inside/Outside includes some of these images, but is more than a reprise of earlier exhibitions. I have continued to experiment with the fence as an aesthetic element, making compositions that are more abstract than my earlier ones. “Shroud” (above) is one example. Phil’s contribution to “inside” is a series of small construction themed sculptures.

For the “outside” portion of our show we did a true collaboration. I had previously installed orange and black construction fencing in and around a gallery exhibit of my photos in order to encourage viewers to reassess the visual impact of fences in the environment. The appeal of installing fencing in and around the sculpture garden was immediate for me and for Phil – who came up with the ideal complement to construction fences: sculptural ladder-like forms. 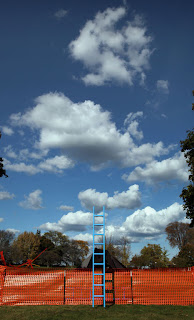 In order to avoid any inadvertent direct references to Christo’s ambitious earthworks, to which these installations bear superficial resemblance, our fences are intended to remain stubbornly non-sculptural, apparently utilitarian intrusions in the landscape. As such they are meant to symbolically replicate the experience I had of discovering construction fences along the river. As a contrast, both aesthetically and conceptually, Phil created stubbornly non-functional ladder-like sculptures. The orientation of these “ladders” varies with site specific intentions, some but not all of which relate directly to the fences. Among other things, the effect is intended to create tension between notions of what constitutes an art object vs. a functional object.
If you haven’t yet been to see the Lynden Sculpture Garden, which was only recently opened to the public on a regular basis, here is a good excuse to get out there. It is, of course, a premier destination for art in and of itself. If you come to the opening of Inside/Outside you get to see the incredible permanent collection too – free!
﻿ 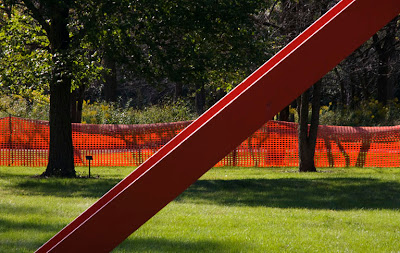 For more information about the show, go to Lynden Sculpture Garden.
To see more images of the outside installation, click here.
To read more about Accidental Art and see examples, click here.