The idea of an “art colony” sounds quaint in an age when more artists are finding virtual communities online than actual ones face-to-face. Traditionally, an art colony was a place where artists lived if not communally then at least in proximity with one another (and usually away from other people) in order to interact and practice their art. “Getting away from it all” is much harder these days, but a version of this is still happening in a corner of Massachusetts.

Last week I made a long-overdue pilgrimage back to Rockport, which, along with its more famous neighbor, Gloucester, occupies a small, rugged island at the tip of Cape Ann. (Founded in 1623, Gloucester lays claim to being the oldest seaport in Massachusetts. Always famous as a fishing and ship-building town, it gained more recent notoriety when it was pummeled by the “Perfect Storm” in 1991.) The rugged beauty of the landscape and sea, along with its proximity—a short train ride north of Boston—has attracted many famous artists. Considering how well suited the character of the place is to their work, these include some you might expect, such as Winslow Homer (above right), Edward Hopper, and John Marin. But other less predictable artists, like Mark Rothko and Barnett Newman, also found here an atmosphere conducive to their creative impulses. Close knit art colonies were established in Gloucester and Rockport that continue to this day.

When I was young my family vacationed in Rockport every summer. We were there for the beach, where my grandmother had a cottage. In the evening, or on rainy days, we would go to town to visit the shops and galleries on Bearskin Neck, the epicenter of tourism. “The Neck” also was the location of the modest fishing shack known universally as “Motif #1” because it has long been considered the “most often-painted building” in the country. I loved seeing it year after year, along with all the varying representations I saw in paintings in the many galleries. Like every other tourist, I photographed it. Below left is an image I made some years ago. 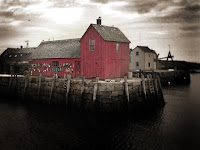 As I grew older I began to realize that the unglamorous, worn character of this simple sea shanty, which initially had made it attractive to artists, now has been lost to its iconic status. I started to explore the less tourist oriented galleries up Main St., away from the crowds on the Neck. The artists I found there pursued a wider variety of subject matter and I learned to discriminate between the tourist kitsch and the accomplished art. An academic training in college and a career teaching art directed my tastes even further from the largely tradition-bound painting still to be found in Rockport where the style leans towards a painterly naturalism and conventional subject matter dominates. It’s a bit eerie, after being away from it for so long, to walk into gallery after gallery and see what looks like the same paintings I saw when I was last here—and not far different from what Homer and his contemporaries did.
But this odd déjà vu feeling is accompanied by another, more solid, comforting one. Here, still, is a place where artists gather and ply their craft, some successfully enough that their names have become familiar over the years. Today the tourist trade is Rockport’s major industry and, unfortunately, the better artists, in my experience, are a little harder to find amongst the plethora of artsy-craftsy shops that cater unabashedly to the undiscriminating crowds. As an art educator, it often feels like an uphill battle to raise my students’ aesthetic sights against an overwhelming, homogenous commercial culture. I can well imagine the artists of Rockport feeling that way, too. 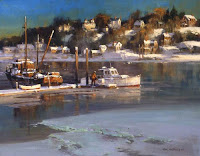 At the relatively quiet far end of Main St. I found two galleries that stood out for me. Tom Nicholas works in a very traditional style with flawless technique and a lovely sensitivity to light, mood, and place. He has no website. His “Smith’s Cove, Gloucester Harbor” is to the right. Susanne White takes as her subject the familiar rocky terrain, strewn with driftwood, shells, and other flotsam. She enlarges them until their abstract qualities—color, texture, line, pattern—come to the fore. Her “Vertigo” is below left. Proving an exception to my earlier observation, my favorite photographer, Robert Lerch, runs his gallery in a surprisingly sequestered alcove in the heart of Bearskin Neck.

So, here is today’s art colony. It may not attract the contemporary equivalent of a John Marin or Mark Rothko, but I think there is a place for well done regional art. All art doesn’t have to be challenging. Art certainly doesn’t have to be inaccessible—something academia is famous for and often seems gratuitous to me. And beauty never goes out of style even when it goes out of fashion. If an artist can paint well and make a living of it, my congratulations to that! An artist could do worse than live in a beautiful place (alongside other artists) and be inspired by nature.

To see other samples of Rockport artist’s work, go to the Rockport Artist’s Association.

To see a few preliminary photos from my excursion there, go to my flickr page.

To read about my Rockport experience from another perspective, go to my Urban Wilderness blog.
Posted by eddee at 11:46 AM