The museum is imposing; a behemoth, like a whale brought in on the tide and beached on the riverbank. Approaching it on the Millennium Bridge from across the Thames, as we did, it looms larger and larger as we near. I am reminded of the Periclean plan for the Acropolis, with its forced perspective that increases the monumentality of the Parthenon. A former powerhouse, through sheer scale and austere symmetry it commands its riverside location with a massive form. Its single oversized chimney resembles a minaret. Though more fortress than temple, it is a layered symbol of the power of art.

First impressions are powerful. While subsequent experiences may rectify false notions created by them there is no doubt that first impressions have the potential to establish a lasting bias. Museums around the world, from Milwaukee to Bilbao, have created new architectural presences in order to cash in on this effect. Repurposing an old power station is perhaps a riskier if not bolder move than new construction. Its phenomenal collection is certainly a factor, but to the renowned Swiss architects Herzog & De Meuron, who oversaw the renovation, goes much of the credit for its success (its own website claims that Tate Modern is one of the top three tourist attractions in the UK.) 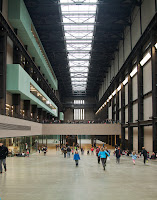 The Tate’s interior is as imposing as its exterior. The famous Turbine Hall, 115 ft. tall and 500 ft. long, dwarfs all human sense of scale. Strangely enough, I find in the spectacle of its architecture and its spaciousness a connection with the National Gallery, two art museums that could not be much more dissimilar in nearly every other aspect. 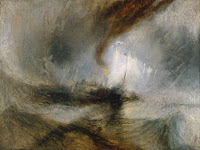 There is one artist, at least, who also forms a connection between the two collections. For the most part, the Tate Modern picks up where the National Gallery leaves off. But here too I am struck by an evocative painting by none other than JMW Turner. That his work graces both museums leaves little doubt of his preeminent role in the history of Modern Art. This is not news to me, but a text panel next to the painting adds a revelation. Mark Rothko, it seems, claims to have been inspired by Turner.

Rothko, in turn, is well represented here at the Tate. I found the room full of wall-sized Rothko paintings to be every bit as spiritually alive and perhaps more moving than the overtly intentional ones at the Rothko Chapel in Houston, TX. Mark Rothko, the wall panel goes one to say, donated these paintings to the Tate in homage to Turner. OK, I’m impressed.

Turner and Rothko are both long-time favorites of mine. There are plenty of others, too, and it is fun to run across them in this new context. (There are whole rooms devoted to Lewis Baltz and Manuel Alvarez Bravo!) What I really enjoy, though, is when a museum enables the discovery of unfamiliar artists. The Tate provides such discoveries in spades.

British sculptor Cathy de Monchaux is represented by a small piece entitled Erase. With obvious reference to both male and female genetalia, a long steel bolt is enveloped in a red velvet-lined denim pouch studded with rivets and held together with a fly-like zipper. Erase is included in an extensive and excellent exhibit called “Poetry and Dream” that intends to “show how contemporary art grows from, reconnects with, and can provide fresh insights into the art of the past.” Monchaux, a contemporary artist, is shown in a context of surrealists. This is just one of several such unexpected juxtapositions that I find refreshing.

The Tate has a small gallery called Project Space that is devoted to “presenting contemporary art through a series of collaborations with cultural organisations around the world.” That in itself is worth noting. The current show of mixed media is called “Ruins in Reverse.” The theme revolves around fictive realities that mimic archeology. I feel a particular affinity for two photographers with connections to Peru, Pablo Hare and Eliana Otta.

There are two disappointments. The vast Turbine Hall is famous for its equally outsized installations, but today it is stark in it emptiness. The other disappointment is my own doing. We took advantage of the fact that the museum is open late on Fridays to spend the day outdoors, but by the time we reach the second floor jetlag kicks in. By the time we reach the third floor it is hard to appreciate the great art we continue to discover.

It is only day one in London. We will have to return.

Images of Snow Storm by Turner, Black on Maroon by Rothko, and Erase by Monchaux courtesy Tate Modern website.
Posted by eddee at 11:44 AM