January is a gamble in Milwaukee. We all know that below zero temperatures and blizzard conditions could have killed any desire to go out on a Friday evening. Gallery night also is a bit of a gamble. There are a great many venues from which to choose and wide variability in the types of art being proffered by them. The very success of the venture can lead to crushing crowds in a few of the more popular locations and more of a carnival atmosphere than one conducive to art appreciation.

Last night, however, the stars must have been in alignment. Everything seemed to click, at least for me. I hope it did for you as well, if you went out. Every gallery my wife and I visited had healthy but not bruising crowds along with a wealth of wonderful art from the well established to the unfamiliar. The remarkable 40° temps earlier in the day left a balmy feeling that helped keep my spirits lifted between venues.

If Milwaukee is indeed one of the top 12 “art places” in the U.S., as recently reported, then gallery night was supportive evidence. (I attended a listening session on Monday hosted by ArtPlace, the consortium of foundations, gov’t. agencies, and banks that awarded the designation. The designation specified East Town and the Third Ward rather than Milwaukee as a whole, which neglects the overall fabric of a city that supports those arts districts as well as overlooking other significant places to find art in the area. But, mea culpa, I spent most of gallery night in East Town and the Third Ward!)

I don’t have time to do more than provide a taste of what we saw last night. Almost everything we saw was just opening and is ongoing, so check them out at your leisure.

We started with the trio of new shows at the Haggerty Museumof Art. Dark Blue: The Water as Protagonist sprawls through several of the galleries. As the name indicates, everything in this show of both contemporary and vintage photography relates somehow to water. Like the subject, it is a tenuous, fluid connection that assembles and juxtaposes conceptual with documentary, monumentality with banality. We raised our eyebrows now and then, but agreed that overall it’s a strong show. (And, hey, it includes my favorite Misrach image. How cool is that?! The Meyerowitz image at the top is also from this show.)

Compressed within the tight space of a side gallery, local photographer Kevin Miyazaki has created a kind of chapel devoted to Lake Michigan. In a two-week period, Miyazaki drove 1,800 miles and circled the lake. One wall features portraits of people he met along the way and the facing wall is a grid of lake views in which the horizons are precisely aligned. The result is a surprising mediation on the not-so-subtle variations in color and texture of the water and sky. The two sides of the room suggest the interconnectedness of the human and natural aspects of the environment.

Gallery M at the Intercontinental Hotel is hosting the finalists in the Pfister Hotel’s artist in residency for the coming year. Once again there are a few surprising choices among the contenders and it will be interesting to see who is selected. 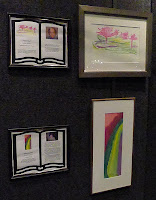 After that we headed to the Third Ward and lucked into one of precious few free parking spaces on the street, not far from Translator, a design firm that is hosting a show called Art in Unexpected Places. The work in this show was all done by participants in the Alzheimer’s Association’s Memories in the Making program. The watercolors are unpretentious and fresh. Each is accompanied by a short story about its creator. It is a fitting reminder not only that life is short and memory unpredictable, but that genuine art doesn’t have to be about marketplace values.

Although we had other places on our to-see list, we ended up spending the rest of the evening in the Marshall Building, which was humming from top to bottom. Quick hits, descending from the top:

Plaid Tuba, the arts incubator created and led by Reginald Baylor, has moved from its first floor digs to an expanded suite of studios on the sixth floor. If any place can “manufacture creativity” as its motto insists, this is a good candidate.

Every year in January the Portrait Society Gallery commissions a local artist to create a “Winter Chapel.” This year Kevin Giese has installed a grove of hollow birch bark tree trunks culled from the northwoods near Bayfield, stripped and then carefully stitched back together. It provided a magical, quiet interlude in the midst of the clamoring crowds.

Sculptor James Toth has returned to the art scene after a long stint as Director of Exhibits at Betty Brinn Children’s Museum. His evocative abstractions made of polished “cementitious” materials with the appearance of marble grace a pop-up gallery on the third floor.

Along with the regular fare in The Fine Art Gallery and Gallery 218, always worth a peek, Blutstein Brondino Fine Art is hosting artworks by the Grand Avenue Club. The club provides services for adults who have experienced mental illness and displays its members’ art regularly on its own walls at 210 E. Michigan Street. It’s nice to see it acknowledged by a commercial gallery. Kudos to BBFA!

Last but not least, Elaine Erickson has anointed two long time members of CoPA (Coalition of Photographic Arts) with her first ever show of photography, called Eye of the Beholder. George Sanquist and Yong-ran Zhu are an appropriate match, each following the tradition of classic black and white silver gelatin printing process, which has become far from common in this digital age. 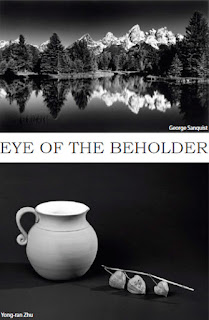