I learned to cook during my college years when I lived in a house off campus with a group of friends. We shopped at the local natural foods coop and we took turns making healthy dinners. It was the mid-70’s and we didn’t call ourselves hippies or foodies. We just liked to cook and eat good food.

I was studying art at the University of Wisconsin in Madison. I would never have confused my studies of painting, ceramics, or printmaking with what I made for supper. I certainly wouldn’t have called it art.

I have been cooking – and making art – ever since. Never once have I considered either activity as being a substitute for the other. 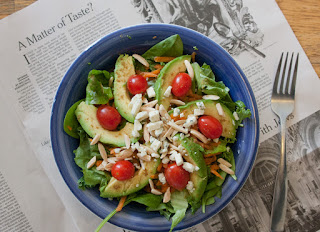 When my wife is at work I like to read the newspaper while I’m eating my lunch. Yesterday, I settled down to a large tossed salad of spinach, red leaf lettuce, chopped kale, grated carrots, cherry tomatoes, sliced avocado lightly sprinkled with cumin, and crisped free-range turkey bacon, garnished with slivered roasted almonds, diced scallions, and crumbled Gorgonzola, drizzled with fresh lime, and dressed with balsamic vinaigrette. I opened the NY Times to an opinion piece called “A Matter of Taste?”


In the article the author, William Deresiewicz, asserts that Americans have been on a foodie fad for a couple decades now that has led them to abandon other aesthetic pleasures, specifically art:

“Foodism has taken on the sociological characteristics of what used to be known…as culture. It is costly. It requires knowledge and connoisseurship, which are themselves costly to develop. It is a badge of membership in the higher classes, an ideal example of…conspicuous consumption. It is a vehicle of status aspiration and competition, an ever-present occasion for snobbery, one-upmanship and social aggression.”

As I continued to read my curiosity turned to dismay. Had my 30-year career teaching art been for naught? Could my former students even now be finding in food as much satisfaction as in art? One that I know of is currently owner of a fine, upscale restaurant in a hip part of town.

The parallels continue: “Like art, food is also a genuine passion that people like to share with their friends. Many try their hands at it as amateurs — the weekend chef is what the Sunday painter used to be — while avowing their respect for the professionals and their veneration for the geniuses. It has developed, of late, an elaborate cultural apparatus that parallels the one that exists for art, a whole literature of criticism, journalism, appreciation, memoir and theoretical debate. It has its awards, its maestros, its televised performances.”

I found myself so absorbed, if appalled, by the author’s thesis that I didn’t notice the blood dripping down my fork. Finally alerted by a widening dark red stain on the newspaper, I applied a Band-Aid to the cut on my finger that was producing this gusher. I must have sliced it while dicing my scallions.

Only then did I notice the pain. The obvious metaphor loomed: here was an unconscious expression of my distress at the ideas I was reading.

Bandaged and thus fortified, I turned back to the Times to discover that Deresiewicz feels the same way I do about the situation. “Food is not art,” I read with relief. “A good risotto is a fine thing, but it isn’t going to give you insight into other people, allow you to see the world in a new way, or force you to take an inventory of your soul.” (There’s more: check it out.)

All the while I was absorbed in this personal, almost existential drama, my one-year-old granddaughter, whom I babysit, had been in her highchair, absorbed in her own distinctly aesthetic food experience. I had given up the spoon to her for the first time and she was busily figuring out which end held the Gerber lasagna. She alternated fiddling with the increasingly sloppy spoon and gumming the slice of real, farm fresh apple in her other hand. Some of both even ended up in her mouth.

She was proof, although it wasn’t needed, that food is not only an aesthetic experience but also a visceral, tactile one. As she gets older I hope she will learn to discriminate between the real food and the processed kind. Oh, and the very real and important difference between food and art. 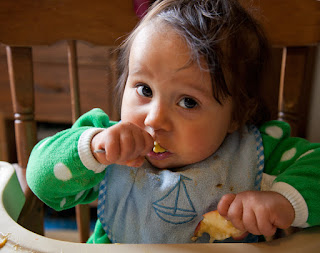