Last week I first encountered the Dia Art Foundation’s museum in Beacon, NY. It is housed in a 30,000 sq. ft. former factory. The place and the art invite introspection. 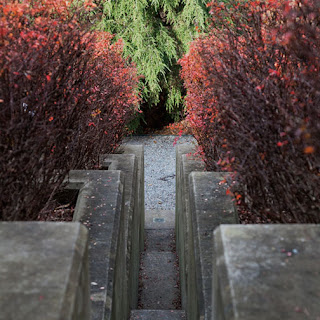 Space.
Light.
Dual naves of brightly lit white space. Polished wood floors stretch into the distance. Tiny solitary black-clad figure at the far end. Silence.
To the left, variously colored irregular shapes punctuate the white bays the length of the vast wall. Bare wood floor. (Imi Knoebel)
On the right, polished steel plates form a single line down the middle of the polished wood floor. Bare white walls. (Walter de Maria)
Space.
Beyond that, more space. Light streams in from skylights overhead.
A small, brightly lit alcove. Mammoth rough-hewn vertical granite boulder stands, improbably, tightly bound in a niche. somewhere in the vast silence of afghanistan in the mountain at bamiyan stand three empty niches. Colossal granite teardrop of the Buddha. (Michael Heizer)
Space.                         Air.
A series of thin strings of black yarn stretched from floor to ceiling emphasize the air around them. Concrete pillars. Galleries opening out to more galleries.
Sunlight.
Thin red strings establish a rectangular plane in the space, canted against the rectangular wall floor ceiling planes of the architecture. I step across the thin red line on the floor. Through air. (Fred Sandback)
White walls give way to concrete, then brick. Polished wood floors become polished concrete floors. Finally, two exterior windows. Glimpse of an expansive, empty green lawn.
L-shaped steel remnant of original factory embedded in brick wall. minimal; life mimics art. the place wants to be photographed. Photography not permitted. an issue of control? privacy? marketing? at every turn the place demands to be photographed. i can’t imagine the harm a photo would cause the art or the museum. i resist the urge to sneak a shot. Numerous black-clad guards wander throughout the galleries. issues of trust? They smile when spoken to. Reply to questions with beatific patience.
Finally, shadows. A dark corner contains rubble. Vertical stacks of photographs mounted on steel. In shadow. Horizontal stacks of enormous felt pads weighed down by rusted steel plates. Not a loading dock. Not a storage room. Dark dustless rubble. (Joseph Beuys)
Cleanly bored holes of four geometric shapes in the polished concrete floor. Dark, empty interiors. Invisible depths. A glass wall prevents close inspection. a friendly, black-clad guard, when asked, says that tours inside the glass are available upon request. my request elicits a walkie-talkie call. no reply. maybe later she says. she says that the artist himself installed the glass. it is being viewed as he intended. an issue of control? Mystery. can mystery be created? is mystery endowed from within or without? in the mind of the beholder? The four holes, gated empty lightless bottomless pools, remain mute. (Michael Heizer)
Mezzanine. Four Brobdingnagian curls of rusted steel. Four ambulatory chapels off to the side of the Cathedral. Four short labyrinths to choke a claustrophobic. Four giant steel clamshells. Inside each, a pearl of peacefulness. they want to be outside, in the back, on the grass, under the open sky, open to the heavens. not to the gray coffered concrete factory ceiling. And yet, after a breathless entry, a place to inhale deeply. (Richard Serra)
In the spotless attic, rough windowless brick walls, polished almost liquid concrete floor. Crouched in the far corner, enormous black bronze spider, Gothic in dark silent splendor. Menacing. or not. there are no secrets here, only misunderstandings. Far down the dark hall the black-clad guard leans against the wall, reading. Silent. (Louise Bourgeois)
Suddenly a wall of glass. Exterior windows. Bright north light. Room full of colorful vigorously twisted steel forms, like carefully spaced collisions. almost baroque compared to the prevailing minimalism. (John Chamberlain)
Outside, narrow walled garden. Leafless trees, brown grasses, green hedges in rigid rows. Sounds of birds. Cuckoo. Crows. Unrecognizable sounds. Almost voices. Muttering. Almost intelligible words. what are they saying? they don’t want to be understood. Catalogue text: Sound Piece. (Louise Lawler)
The warmth of the sun.
Air. 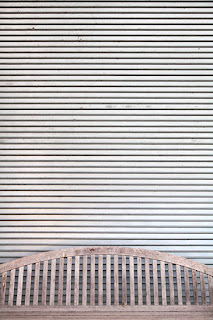 I did not succumb to the temptation to sneak photos inside the museum, harmless as that prospect seemed. The two images that accompany this meditation are my tribute to the spirit of the collection. They are from the garden, where photography is permitted. I remain frustrated by museum policy.

After Dia Beacon I went to nearby Storm King Art Center, where I could take plenty of pictures. Photo essay on my flickr page.
Posted by eddee at 2:44 PM