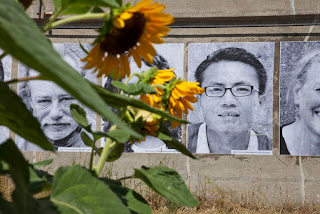 Pete appeared suddenly, seeming to materialize from nowhere. Perhaps from the street itself, which is where he calls home. He approached the wall cautiously, hesitant. His own face gazed back at him, enormous, calm, composed. Softly, he said, “I can’t believe this is happening.” In the deep shade under the brim of his cap his tired eyes glistened, first with pride, then tears. He repeated, his voice barely audible, “I can’t believe…, this is me.” After a long pause he added, “I’ve been on the streets for….” His thought trailed off, leaving me to wonder how long. He sat on a board that edged one of the planting beds in the community garden. He sat for a long while in silence, watching as the crew of volunteers pasted up face after face alongside his. 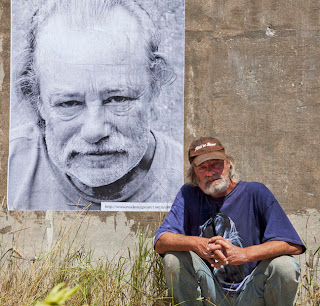 When Pete finally got up to leave he reiterated his disbelief. Then he said he was going to go invite all his friends to come see it.
Urban Eden is a photographic mural project named after the community garden that it faces. It was created by Sally Kuzma and John Ruebartsch. Kuzma is an artist and ESL teacher at the International Learning Center (ILC), a program of Neighborhood House of Milwaukee. She acted as project director, seeking out participants and recording their stories. Ruebartsch, a professional photographer, made the portraits. 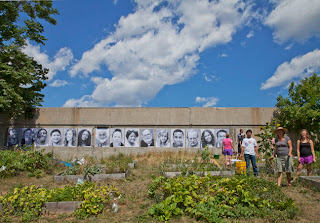 The subjects of the portraits all have some relationship to the garden and its neighborhood, which is in one of the city's poorest zip codes. At Urban Eden refugees who attend the ILC grow and harvest food alongside people from two multicultural neighborhood parishes, St. Paul’s Lutheran and Central United Methodist. A group of environmentally active students from Marquette University were instrumental in establishing Urban Eden. Some of them are included in the mural. 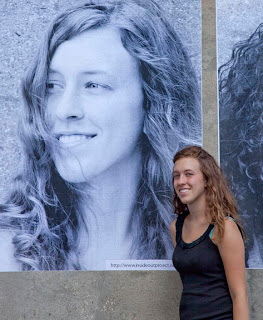 That the mural is more than an art installation is almost too obvious to mention. Kuzma shared with me the following stories:
“During the mural installation yesterday, some profound things were happening:
An artist who came to see the mural approached me about renting rooms to ILC refugees; she owns a rooming house in the neighborhood and feels called spiritually to do this.
A Marquette student who had helped initiate the garden came to paste up posters but ended up spending most of her time playing with neighborhood children in the ILC playground.
People from the neighborhood are asking how they can be part of the garden, and learning that the colorful Somali Bantu women they see at the bus stop on 25th St. are coming to school here.
It's almost as if the mural is an incidental thing that is making visible the very real good will that is being generated in this place by a lot of different people. Marking the spot where human beings are being human.” 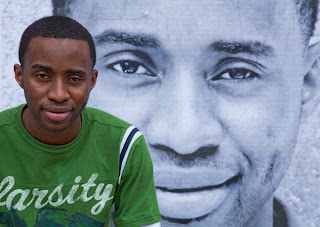 The project is also much more than a single installation. Urban Eden is part of an international effort “to discover, reveal and share the untold stories and images of people around the world.” That effort, called INSIDE OUT, was inspired by the work of JR, an internationally acclaimed artist and winner of the 2011 TED prize. (If you haven’t heard of TED, which awards $100,000 annually to people with ideas that can change the world, check it out: TED prize.) 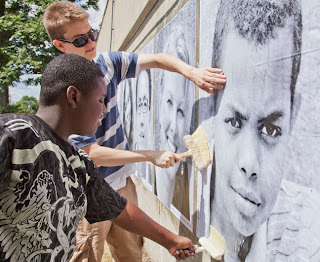 The portraits that make up the Urban Eden mural, along with the stories, will be archived online with similar projects from around the world at INSIDE OUT: A Global Art Project. The mural is located on 26th St. between Wisconsin Ave. and Michigan St., behind the US Bank building, facing south. 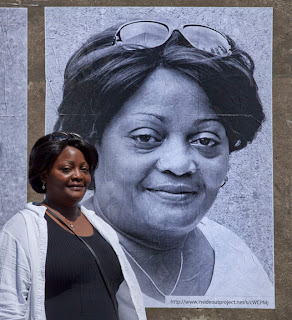 This is not the first collaborative project for Kuzma and Ruebartsch. Here, There and Elsewhere: Refugee Families inMilwaukee, a photo-documentary that debuted at Walker's Point Center for the Arts last summer, is currently touring to several locations around the country. 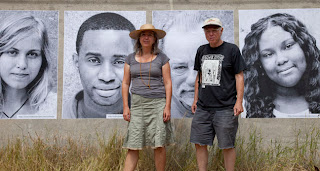 Here Kuzma and Ruebartsch stand in front of a section of the completed mural. To see more images from the installation, go to my flickr page.
Posted by eddee at 3:42 PM