Science, Poetry, and the Photographic Image

I just returned from Atlanta where I attended the annual conference of the Society of Photographic Educators (SPE). You can certainly be excused if you're not familiar with SPE (unless you're a photo educator!) I don't attend the conference every year, but it is a good way to feel the pulse of photography as it's being passed on to a new generation. I thought I'd share some of my experiences.
The theme of the conference was Science, Poetry, and the Photographic Image. Although any conference of photographers will be awash in photographic imagery, I saw scant evidence of serious science and less of poetry. I'll come back to the science in a moment. As a fan and occasional writer of poetry I was especially looking forward to seeing how these disciplines might be integrated creatively. But I was disappointed when two featured speakers gave it no more than an obligatory, almost dismissive nod. The third didn't even bother to nod in its direction. 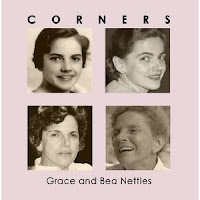 An exception was Bea Nettles, who has been combining her mother's poetry with her own photographic images since 1972. That personal and loving collaboration has taken the form of a series of books that Nettles created using a variety of available technologies. Her presentation traced a history of those technologies, from a loose leaf binder full of collages paired with typewritten pages of poems through years of typesetting and offset lithography to her most recent foray into the new world of digital image-making and print-on-demand online publication. Her visuals showed how each new phase brought greater fluidity to the relationship between text and image and also resonated with my own bookmaking and publishing efforts, which have had a similar trajectory. (Her mother's poetry was quite good, too!) 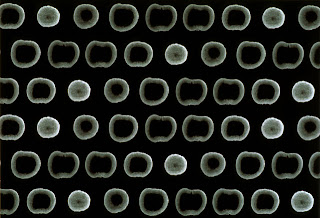 Back to science. One of the featured speakers was Catherine Wagner, a highly decorated photography veteran with a long list of fellowships, awards, and exhibitions in major art museums. With no fixed style - she has a chameleon's sensitivity to her subject's context - nearly all of her work oozes with science. Her image above is a series of MRI scans of a pumpkin. Lest it seem boringly repetitive I suggest you check out this link to her website to see a similar series of scans of a pomegranate in a 40 ft. long museum installation. Wagner admitted that many of her scientific subjects can be intimidating for the average audience. Her solution is to "use beauty as a formal strategy for observation." In other words, whether or not you find the "typologies of scientific processes" fascinating you will suspend your reluctance to view them because of the exquisite beauty of the photographic images.

They are indeed beautiful. If I had to criticize her work, I would argue that its formal qualities may be too facile and her approach to her subjects too neutral. She appears to keep any potential for scientific controversy at the arm's length formal abstraction provides. The image below is from a series she calls Frankenstein in an overt reference to Mary Shelley's fictional character. Wagner likens these foil wrapped vacuum chambers, which are used for "experiments in high energy physics and synchrotron radiation research," to Shelley's Frankenstein. However, she misses an opportunity to relate her imagery to the darker implications of the impulse to create such "monsters" that is so much at the heart of Shelley's masterpiece. 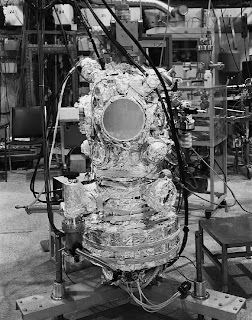 The work that appealed to me the most was that of keynote speaker, Abelardo Morell. Although I've seen some of his decades-long experiments with the camera obscura before, I was not familiar with his name. If that is true for you, too, I am delighted to introduce him. The idea of a camera obscura (which means "dark chamber") predates the Italian Renaissance which gave it the name. A camera obscura is a device, usually a box, into which light is admitted through a pinhole in one side. An image of the scene in front of this device is projected onto its back surface. Renaissance artists used such a device to make accurate depictions of perspectival space and it is the distant precursor to the photographic camera. To make a long story short, Morell uses an entire room as a camera obscura, making a pinhole in a blackened window. He then photographs the image that is projected (upside down and backwards) onto the rear wall of the room - spilling across doorways and furniture, etc. The resulting photographs are simultaneously lovely and disorientingly surreal. 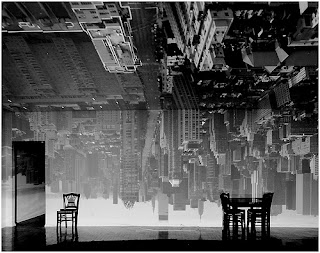 Out of what was overall a good conference, there was one bittersweet element. One of the highlights of every SPE conference is the opportunities that are available to visit local museums and galleries. Atlanta is home to one of my favorite museums, the High Museum of Art. Unfortunately, the major current photographic exhibition was the Cartier-Bresson retrospective that I'd already seen at the Art Institute of Chicago. Ah, but..., I thought, they also have an exhibit of Toulouse-Lautrec! I adore his work. My hopes were dashed, however, by the perceived borders of art that I find so limiting. The High graciously opened its doors after hours on Saturday night for a special viewing by SPE members...of the Cartier-Bresson show only - not the Toulouse-Lautrec show. All in all, however, Cartier-Bresson, arguably the most important, influential, and ubiquitous photographer of the Twentieth Century, is worth a second (third, fourth...) viewing. Familiar as the work is, it's especially instructive to see the less famous pieces.


His eye is unerring, able to capture a multitude at the exact instant when everyone in the crowd has an expression worth studying. I’ve made innumerable students memorize his immortal phrase, “the decisive moment.”
The exhibit wisely, I think, shows his work in different states, and with varying print quality. His images were made for publication in magazines and therefore he didn’t do his own printing for most of his long career. The “fine print” made with the luscious gradations of black and white silver gelatin that one learns to expect at a museum of this caliber has little meaning in this context. It was great to see the luscious ones alongside those of less discriminating quality. I overheard a photo teacher commenting on the low grade that a student would receive if a print of such poor quality made it out of their darkroom!
To view my photo essay from my visit to Atlanta, go to Images of Atlanta.
Posted by eddee at 10:54 AM